By the time this article is printed the cricket season will be over for another year. We can all reflect on a very exciting year, being the first year for a Bolney second team for many years and the first year ever for a Colts side playing league cricket.

Everyone was delighted that the first team remained in Division 1, bearing in mind that we lost Jack Collins for most of the league season following an operation for appendicitis, and Nick Ridgway with a broken thumb which required an operation to have a pin inserted! The script for the last game could not have been better written – both Poynings and Bolney to play each other. Poynings needed to draw to stay in Div. 1 but Bolney needed to win to stay there. Bolney declared on 206 and things were not looking too good with Poynings 140-4 until Jack Collins came to the party taking 8-59 and secured a Bolney win by 11 runs! Jubilant scenes at the Club as you can imagine and thereafter I think Haywards Heath suffered until the early hours!

The second team had a really good season being in the top two of the division for most of the season but unfortunately couldn’t win the last game and so finished third – the top two being promoted. They had some sparkling performances with Dean Hamilton getting the league award for most runs in the division.

The Colts won most of their games in the friendly league they played and there is a lot of potential amongst them for the future. Their season ended with a friendly game of children v parents followed by a barbecue and awards. There was a lot of fun had but there’s no way parents are going to easily let children win!! 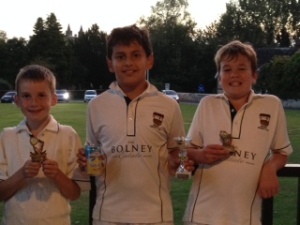 Our Sponsored Treasure Hunt raised over £700 which was amazing – thank you to those who took part and for some very generous donations from those who were unable to. The clues are still out there and so if anyone would like to do a lovely 2 or 5 mile walk just let me know and I will email the route.

A huge thank you to Mark Barrow and his team from Bolney Nursery for donating our beautiful hanging baskets again and to everyone who has supported us in any way this year, either financially or by just coming to watch – we are always very grateful.